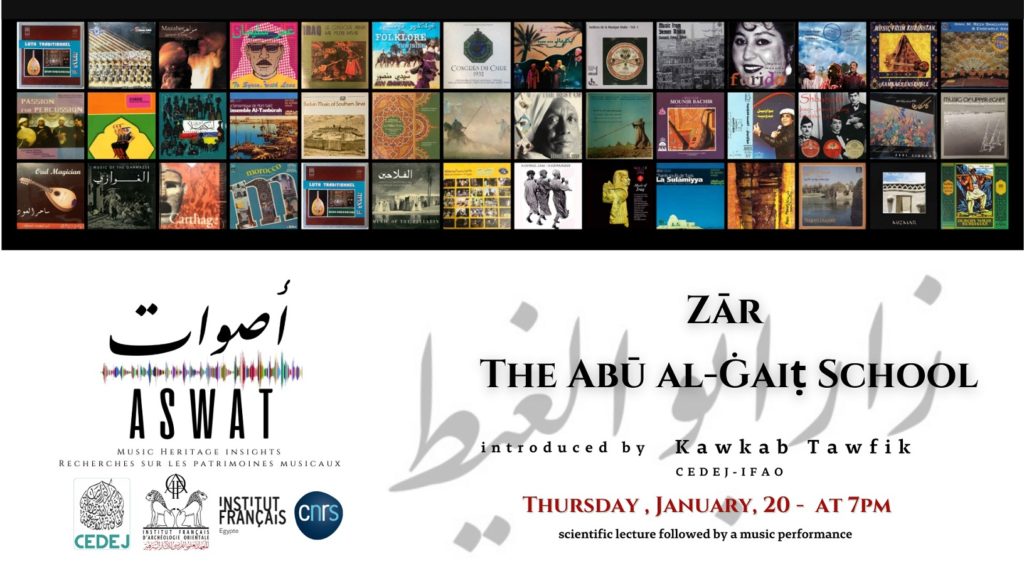 Sounds – and music – are able to shape individual and collective identities, define spaces and borders, denote cultures, transmit knowledge and influence style lives. ASWAT is a series of music meetings and performances focusing on Egyptian culture(s) of music that seeks to explore a range of musical practices across Egypt, and beyond, through the contribution of academic speakers and music makers, followed by a concert.
The meetings will offer the opportunity to deepen some historical, religious, social and musicological aspects that interwoven in, and from, the Egyptian music heritage, addressing creation, performance and reception practice.
ASWAT is a joint initiative from IFAO and CEDEJ, curated by Kawkab Tawfik.
The great Egyptian 20th century music tradition is not dead but alive both in contemporary performance and it is inspiration for new compositions. Arabic music making is more and more developing and shaping new forms and expressions, traveling across and beyond geographical spaces, meeting new audiences.
Kawkab Tawfik (IFAO-CEDEJ) will present the zār Abū al-Ghaiṭ tradition along with introducing the musicians and members of the Ṭarīqa Aḥmadiya Ġiṭāniya, represented by Mohammed Abuzeid and the Abu al-Ghait Ensemble who will perform the music repertoire of their heritage.
The Zār of Abū al-Ghaiṭ is a very unique model of cultural, religious and music syncretism.
Developed between the XIX and XX centuries in the Delta of Egypt from the Sudanese and Upper Egyptian zār cult, it is carried on by the sufi Ṭarīqa Aḥmadiya Ġiṭāniya. This Ṭarīqa is founded by the dervish Sheikh Hassan Abu al-Ghait who combined the zikr with the zār
practices in the Abū al-Ghaiṭ village and Qalyubiya Governorate. The descendants of the sufi saint are still keeping the zār tradition alive, holding the legacy of their ancestor.
They merge sufi textual and music repertoire to the zār rhythms and play zār songs with instruments belonging to the Egyptian religious tradition: the drums table and naqrazān, the frame drums mazhar and ḥāna, with a strong role of the ṭūra (cymbals) and the kāwālā (Egyptian single reed flute). During the zār ritual, a small ensemble is set around the practitioner who dances following the beat, considered the breath of the possessing spirit.
Dancing on a progressively speed-increasing beat, the possessed person can enter in connection with the spirit, appease his/her anger and end the conflict that caused the illness which the practitioner was complaining of.
5 janvier 2022