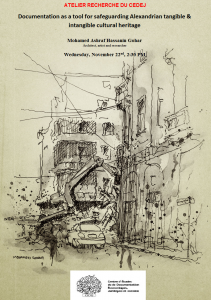 Modern Alexandria is well known for a specific period of its modern history; the 100 years between 1860 and 1960 which shaped the current image of the city. Since the 70s the population of Alexandria has exploded. In time, many of the older buildings were demolished and replaced with sterile modern structures. After the revolution of 2011; more than 27,000 new buildings were erected most of them illegally and many on demolished heritage buildings’ land. As a result, the city lost more than 100 protected buildings out of a list of almost 1135 listed in 2007 by the government, not to mention the lesser-known, hidden or even deserted examples of built heritage that were not listed and deserve special attention.

Description of Alexandria project aims at documenting the built heritage; the embodiment of history, memory and culture of the Alexandrian community, for current and future generations, in order to preserve the identity and sense of pride of our city. The project is a pioneered cultural and artistic documentation study based on the first-hand oral investigation and extensive field surveys of the sites and the buildings whose goal is to determine and record the tangible and intangible cultural heritage of Alexandria, Egypt. It is seeking to document the heritage of the city and its architectural and cultural memories, presenting a true and actual image of today’s Alexandria and the recollections of the past. It also seeks to enhance the engagement of the society in preserving their legacy through a long-term awareness. The research and intended publications are carried out by a team of architects, artists, and researchers and it was found by architect Mohamed Gohar in 2013.

Mohamed Gohar is a senior practicing architect, artist and researcher with over 12 years’ experience working in Egypt and Arab region. Mohamed’s practice spans projects in housing, institutional and public design within Egypt and regionally, having particular emphasis on historical roots of traditional local architecture and its connection to the modern society.